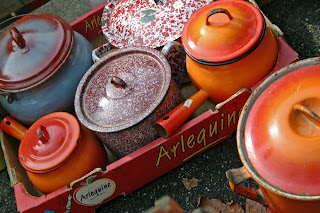 I never went to camp. So now and again that childhood desire arises and I create the ephemeral camp of my dreams. My ideas of it are all screwed up with Disney movies and girl scout meetings. But I’ve lived in a pup tent, can easily start a fire and make a mean s’more- (cultural translation here ) Or cassoulet.

For years, I have been referring to My Camont as Camp France, a sort of license to have fun in a somewhat unrealistic setting (silly big barge, small rowboat, princess tower house, big kitchen… in France.) As the cooking classes and gastronomic tours became the ‘day job’, needed to get a breath of fresh November air and breathe it did indeed this weekend!

. 5 Americans, 3 British, 7 French, a pretty balanced group of cooks and not, convened over the Toussaint Nov 1st holiday here in Southwest France to put pay to all those Cassoulet making myths and most importantly, produce a serviceable boot-camp version of a ‘French Basix’ Cassoulet. for pictures see: http://www.flickr.com/groups/campcassoulet/

With a little encouragement from afar and a handful of French regional cookbooks, I set the standard under some protest from a few more vocal members of the gathering: no tomato, no breadcrumbs and no lamb (there’s nary a sheep in sight in this particular part of .). As Kitchen Captain, I poo-poo-ed the holy trinity competition of city driven cassoulet (Castelnaudary, Toulouse and Carcassonne) in favor of a beginning place to understand that cassoulet is really… about the bean.

The resulting flavors were all I had hoped for- creamy, deep, crusty and soul satisfying. Hearty, yes, but also delicate in texture with sweet beanness and bursting with small morsels of savory salty and cured meats.

We began with three different beans- tarbais-the favorite, Roi du Macy that we found by chance at the Nerac market and similar to a Great Northern or Navy bean, and some dried Fava beans which I realized much too late came from Bolivia (oh, the carbon footprint of this peasant dish!); three different cassoulets cooked in three different ways: in the electric oven, in the kitchen fireplace against the coals, and in the small wood burning terracotta oven outside…oh, yeah and one on top of the stove- more on that later.

With 10 cooks, several bottles of wine and a dozen different pots to choose from …let’s just say it was fun, if a little chaotic. Personally, I like a little chaos in the kitchen so I felt right in my own home. With the help of a good crew of galley ghillies and able scribe Nicky noting it down, we did manage to weigh, measure, and time the official cassoulet. Please feel free to take liberties as you must but this version should result in a very delicious, nicely crusted, deep-colored, traditional cassoulet. We ate it with a shallot vinaigrette winter salad of or escarole, a perfect bitter counterpoint to the simple sweet and salty cassoulet. For dessert David made a juicy Comice pear sorbet, splashed with a bit of Cote de Gascogne white wine served with chocolate, of course, biscotti and champagne. It was enough. Enough for a very memorable meal for 13 lucky friends in the French Kitchen of Camont. Amount: This makes a large cassoulet that fills a 4-liter cassole and feeds 8 people easily. For a visual reference for cassole look here, here, and here. And the Diva in Tuscany just sent this over in a little Tuscan homage to Cassoulet.

Place all of the above ingredients in a large pot, cover with 2 litres of water; because of the addition of the ham bone there is no need to season with salt at this stage. The seasoning can be adjusted when the cassoulet is put together.Bring the bouillon to a boil then turn down to simmer and let cook gently for 1 hour or until beans are just barely tender. How do you tell if the beans are done? The skins go papery and begin to collapse and the cooking liquid is milky.

Step 2: the meat- prepare while the beans are cooking.

Ingredients: This is where you can be flexible using fresh sausage, preserved duck or goose, ham or cured pork, lamb shanks, etc. We used:

Brown all of the above; the duck confit in a sauté pan and the sausages we cooked over the grill, however, they could have been pan browned as well. You want a nice hot fire to brown the skins and it’s preferable to not cook the sausages 100% at this stage as they will continue to cook in the cassoulet and give their juices to the broth. Note: Because we buy the sausage in one long link we made a pretty spiral that may be browned as a whole on one side then turned over in one piece to cook the other side. We did this on a grill over the hot ashes of the log fire.

Step 3: to assemble the cassoulet

The very bottom of the cassole or casserole should be lined with the cooked couenne (pork rind), fat side down. The traditional cassole bottom is just half of the diameter as the top, making a deep slant-sided glazed terracotta pot (see pictures). Remove the bouquet garni, ham bones and onion from the beans and reserve the liquid. The cassole is then layered with the beans, confits and pieces of sausage then finished with a layer of beans. In one dish, we placed a whole, unbroken spiral of sausage as the top layer. Adjust the seasoning of the broth from the beans; a little salt, black pepper and pinch of piment d’esplette tweaked the bouillon that was wonderfully savoury from the ham bones. Now add this liquid to the cassoles until the beans are just covered. Any remaining bouillon should be saved for basting if needed.

Step 4- To cook the cassoulet

Slip the cassole into a very hot oven (around 450’ F/ 275’C); turn down the oven after 30 minutes to medium heat- 350' F/175'C and let the cassoulet bake slowly. The wood oven did this by itself as the coals cooled down ; the fireplace cassoulet was covered with aluminium foil bubbled and cooked at one side at a time so we turned it every time we could hear it cooking away! This was the one that had the sausage spiral on top. The cassoulet in the electric oven was nicely browned in about 1-1/2 hours; we ‘broke’ the crust by pushing into down into the juices two or three more times. A wonderful crust forms during cooking so there is no need for a sprinkle of breadcrumbs* as the beans and sauce do this by themselves. None of the cassoulets were fatty and the one made with tarbais beans had the best texture; the beans were large, firm and creamy and there was ample 'sauce' to make the dish a little looser than the others. All cassoulets were nicely done in about 2 hours. We started preparing the cassoulet at around 3 pm and we’re sitting at the table by eight pm. This could be done in advance- all or in part by cooking the beans, and or assembling before baking.

Pour a glass of hearty red wine like a Madiran, Cahors or Zinfandel, break the crust on top, ladle the steaming cassoulet into dishes and prepare to be very full and very warm as stories are told around the kitchen table well into the night! 
* breadcrumbs- we nearly came to blows over this one. Although I do love a thick crumbling gratinée, I would reserve the use of breadcrumbs for non-starchy dishes and let the beans do the work here.

And for more information about organizing a Camp Cassoulet for your own groups of crazy friends contact Kate at...http://www.frenchkitchenadventures.com/
Kate Hill at Tuesday, November 06, 2007